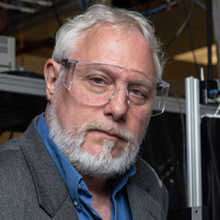 Thomas Orlando directs the Electron- and Photon-Induced Chemistry on Surfaces Lab (EPICS). EPICS is primarily a surface chemistry and physics group that focuses on the use of high-powered pulsed lasers, low-energy electron scattering, micro-plasmas, mass spectrometry, and ultrahigh vacuum surface science techniques. The unifying theme within the group is to understand the important role electronic excitations of surfaces and interfaces play in chemical transformations, which can occur in radiation environments within the interstellar media, plasmas, or planetary magnetospheres. Understanding nonequilibrium processing of surfaces and materials within and beyond our solar system is a specific area of focus, particularly the role of electrons, protons, and extreme ultraviolet radiation in transforming surfaces of planets, their satellites (moons), asteroids, and comets. In addition, there are major efforts to examine the atomic and chemical composition of meteorite and lunar samples that may hold clues to the details of planet formation and possibly the chemical origin of life. These fundamental efforts are connected to many space missions including the Galileo, Cassini, MESSENGER, Deep Impact, and LADEE. Efforts are also underway that examine the chemical processes that occur in star-forming regions, within the solar nebulae, and on grains within interstellar regions. This research group is also affiliated with the Jet Propulsion Laboratory NAI on "Titan as a Pre-biotic Chemical System" and the John Hopkins University Applied Physics Laboratory Lunar Science and SERVI Institutes.

ABSTRACT
While many details of the emergence of life remain in debate, evolution within prebiotic chemical systems may be a plausible path towards extant biology from simple bio-monomers. In aqueous solution, poly-condensation is typically disfavored thermodynamically, but molecular films formed by evaporation of water onto a mineral surface would be both pre-biotically plausible and more favorable for oligomerization. On early Earth, the primary constituents of the primitive mantle, and later the outer crust, were silicates which were present in many forms with diverse surface characteristics. Heterogeneous mineral-surface interactions involving simple organic acids, amino acids, nucleobases and cyanides can serve to catalyze amino-acid polymerization and phosphorylation reactions leading to the formation of amino acid chains with functional persistence lengths and simple nucleotides that can be assembled producing information bearing polymers.  For example, alanine and glycine oligomers can be formed by drying and heating aqueous mixtures of lactic acid and silica nanoparticles [1]. Similar product distributions occur with silica particles pre-reacted with lactic acid, which suggests a catalytic role of the functionalized surface.  Organic: mineral interfaces are also important in producing organophosphates.  Specifically, cyanide (an essential prebiotic precursor) and urea-based solvents have been shown to promote nucleoside phosphorylation by transforming insoluble phosphate minerals into more soluble and reactive species [2].  A general self-consistent prebiotic chemistry scenario in which an evaporitive environment concentrates abiotically formed organics and transforms the underlying minerals to promote significant polymerization and organic phosphorylation reactions is described.