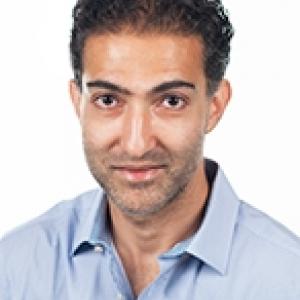 Bilal Haider’s research seeks to identify cellular and circuit mechanisms that modulate neuronal responsiveness in the cerebral cortex in vivo. During his PhD at Yale University, he identified excitatory and inhibitory mechanisms that mediate rapid initiation, sustenance, and termination of activity in the cerebral cortex in vivo. His studies also revealed that inhibitory circuits strongly increase the selectivity, reliability and precision of visual responses to natural visual scences. During his post-doctoral studies at University College London, he extended investigation of inhibitory circuits to the awake brain. His work showed for the first time that synaptic inhibition powerfully controls the spatial and temporal properties of visual processing during wakefulness. His future research will continue building on these themes and investigate mechanisms used by excitatory and inhibitory neuronal sub-types in the cortex during goal-directed behaviors. Discovering how neural networks and synapses control sensory-motor processing is a critical step towards lessening deficits common to many neurological disorders such as schizophrenia, dementia, epilepsy, and autism spectrum disorders.